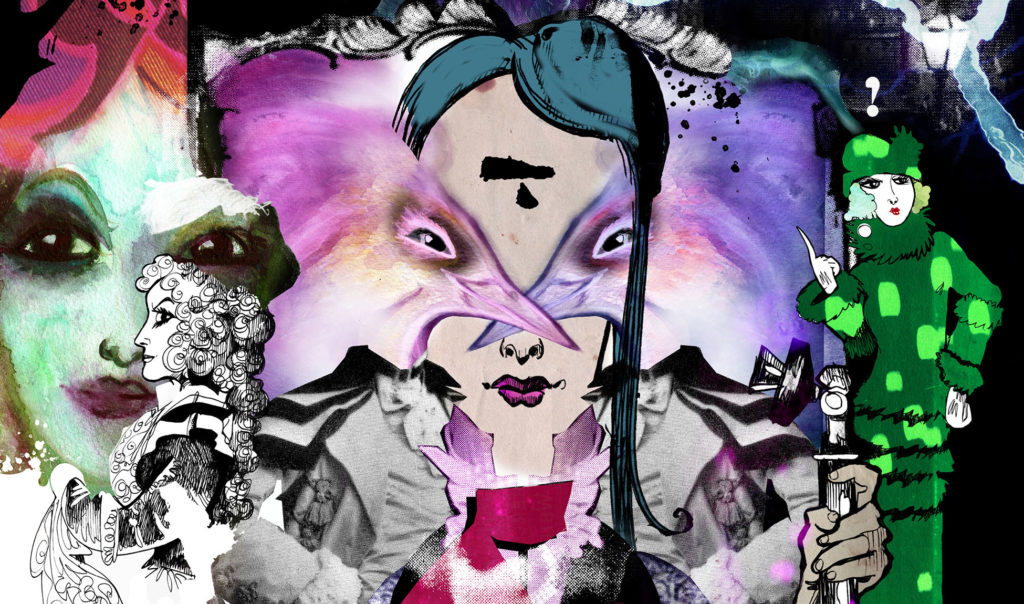 A decade ago, Ian Hodgson initiated his fascinating career through the meanders of hypnagogic electronics, Moon Wiring Club being his main vehicle. Since then, LPs like An Audience of Art Deco Eyes and A Fondness for Fancy Hats have been forging a musical-visual imagery in which Clinkskell shines like a utopian northern city in the Perfidious Albion inhabited by cats, owls and foxes. Creatures of the night that populate a powerful matriarchy of aristocratic heroines.

“Mademoiselle Marionette, Sylvia Mogg and Osram Brown are the main characters. They might not appear in the graphic design of every album, but their motivations influence the scheme of things. Sylvia Mogg appears on the cover of Striped Paint for the Last Post, and is a lot more than an archetype for the intuitive adventurer/explorer with amazing hair. I imagine her emerging from the bottom of all sorts of unusual places. Osram Brown is more of a northern English force, a bit like a guardian or a gardener.”

Creations like Marionette and Mogg highlight the feminine emotion emitted by the merry-go-round of basses and beats that are the backbone of MWC’s musical DNA, but also the same retro-futuristic trend that Bryan Talbot integrates in Heart of Empire, also set in a fantastic Edwardian world.

“I’m a great fan of Bryan Talbot, specially of Heart of Empire, one of my favourite comic books. People sometimes mention The League of Extraordinary Gentlemen as an inspiration for MWC, but I’d say that Heart of Empire contains far better the aesthetics I had in mind. Bryan doesn’t live that far away from me. And there’s definitely a certain northern England sensitivity to his work that I share.”

The relationship between ghostly dubstep and oneiric induction make Clinkskell a mental state that, in Hodgson’s own words, came from his being “keen on drawing aristocratic women with hats.” Although there was something more to it, of course:

“Yes, it had more to do with the degree in Fine Arts I undertook between 1995 and 1998. I enjoyed it, but found that (necessary) academic structures favoured a certain kind of thought. You were so trapped by trying to make your creative work relevant in current artistic movements (postmodernism, etc.) that real artistic intentions ended up suffocating. This kind of thing is obviously very subjective and, of course, many people won’t agree with it; these people compromised with the principles of postmodernism. I don’t want it to sound as if I was against academic art teaching. On the contrary, I benefitted from certain aspects of what I was taught, and maybe having something to react against is as strong a creative impulse as any other.”

The visual conception born from this necessity expands in an aesthetic branch of MWC that includes board games, 80s arcades, card decks and music videos. In this last channel is where Clinkskell’s forms emerge among the psychophonic visions that define a constant in all of Hodgson’s work: “Degradation in time of cinematographic images = memory loss”.

“The style of the music videos came as a necessity. When I started, my computer didn’t have enough memory to handle images in motion, so I used fixed images, sequencing them in quite a rough way. Then I learned how to incorporate moving images, but in very short 10-second clips edited with basic film-edition software. Most of these clips come from my TV archive and are often low-quality recordings of bootlegs.”

“For the video of Walking Through Me, everything, since the original material, is fed through a VHS player and manually distorted (by rubbing the tape). This is transferred from the VHS player and edited again with the same basic software. A few filters are then applied, after that the video is recorded on a DVD and is fed again from the VHS player. To finish up, the final result is recorded directly from the VHS player and slightly modified to delete the frames that have been overcharged, apart from including the correct audio. All this takes a lot of time, but this application of the processes is what gives the latest MWC videos a certain misty spark, very pretty, that I don’t think could be obtained in any other way.”

Policemen escaping, clowns lost in the forest, everyday-life vampires… Strange things that flow between shots and bring to mind other craftsmen of the absurd such as Guy Maddin, Jan Svankmajer or even Walt Disney. Still, “it might sound strange, but I really don’t have any specific filmography in mind when I make a video. It’s more about creating a sustained ambience with what is available to accompany the music. In this way, I often imagine MWC videos as a kind of pop art collage.”

“Instead of using ‘horror’ images, I prefer to choose scenes from children’s TV programmes or light entertainment: Summer Dance Specials, that kind of thing. Somehow, choreographed dances in a solemn mansion might look more unusual and peculiar than the typical ‘here-you-have-some-skulls-and-a-demon.’ And I prefer taking something out of context that recreating the original intention.”

“I guess if you are influenced by archive TV in the music you make and then you use archive TV to accompany that music, inevitably there’s bound to be some kind of synchronicity. I also believe that the great amount of archive films and TV that I’ve watched up until now have had some effect on me. When you absorb all these things, surely they will come out in your artistic efforts.” 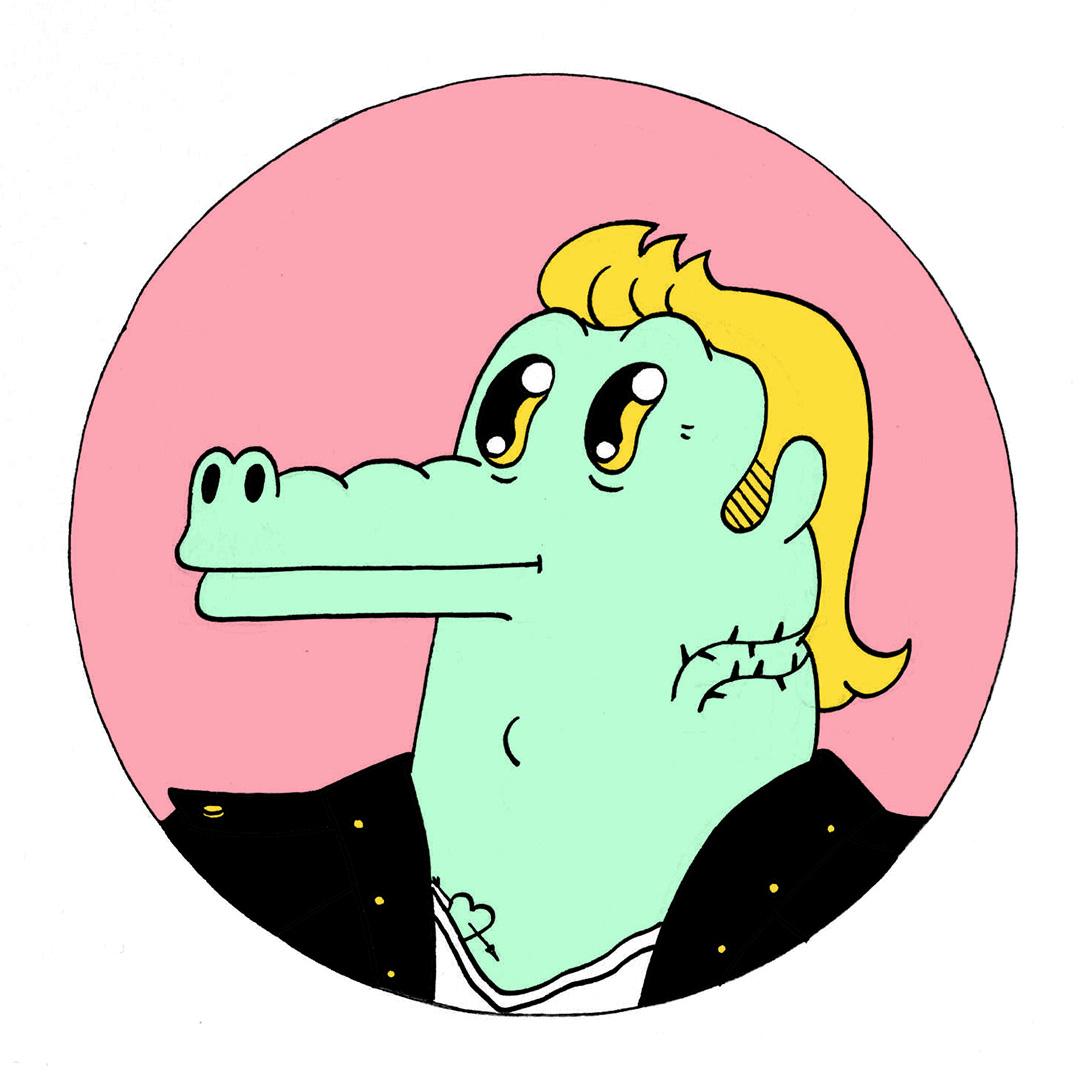