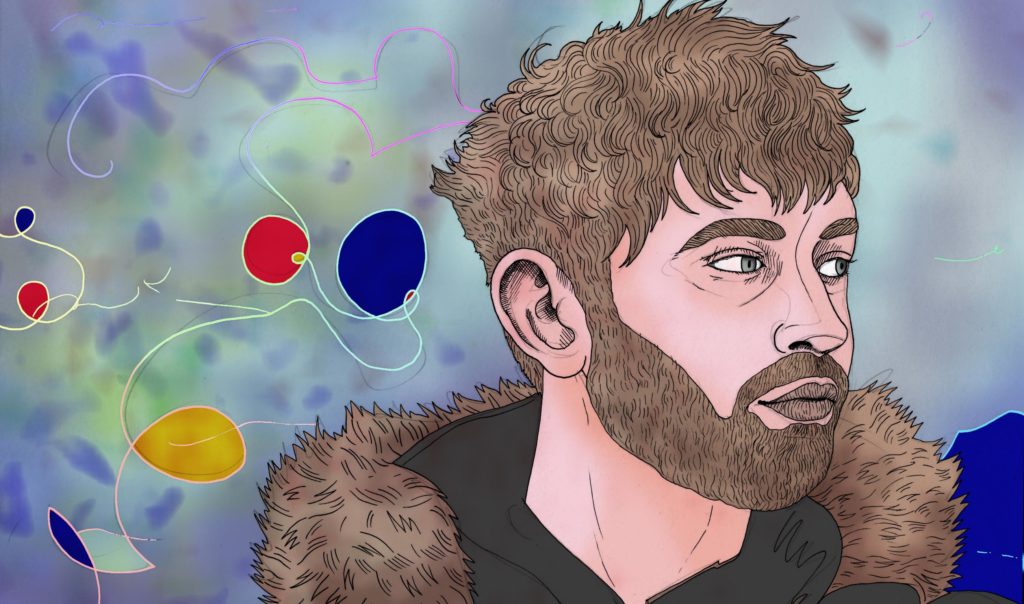 On April 16, Nathan Fake published a new album through his label, Cambria Instruments, consisting of five tracks born from the recovery of compositions that had not seen the light until now. “SANXENXO”, the first song that gives the album its name, was composed through jam sessions in the studio, during the recording of “Blizzards” – his previous work, acclaimed by the public and critics.

“Blizzards” highlights everything Fake is good at: the way his drums tend to dance between established genres; bucolic and nostalgic melodies reminiscent of a warped Boards Of Canada record; the constant tug of war between darkness and light… It’s an inventive mix between progressive techno, UK garage and ambient music with a great deal of experimentation and improvisation that can only happen within a vision that’s not afraid of change.

Although “Sanxenxo” is largely a rediscovery of previous works, it does not revolve around any specific project. These five tracks work as a kind of anticipation of an idea and exhibit a thoughtful and unapologetic character. It’s the state of mind that precedes having that “eureka” moment.
“Sanxenxo” is an accelerated combination of ascending loops. The foundations created by forceful drumbeats and robotic clicks accompany the sound of synthesisers that consistently grow, promoting and sustaining the moment of catharsis.

This track  ̶ close to how I imagine Joan of Arc’s famous religious visions ̶ precedes one of the four tracks made before “Blizzards”. The first is “Kanyon”, a beautiful track that, despite its low intensity in comparison with the previous one, is probably better destined for the dance floor. It is a post-dubstep track, which sustains a happy and consistent rhythm marked by the nervous and constant resonance of the cymbals and the intermixing of synthesizers that expand and deform as the track continues in the purest style of the artist.

“Vanavond” continues in a similar vein. However, the spirited base rhythm with which he begins later intermingles with synthesised melodies that elicit somewhat contradictory emotions – something which I consider to largely define Nathan Flake’s style – a sustained euphoria combined with nostalgic anguish. These two conflicting feelings seem to have a close relationship throughout our lives and especially in decisive moments. In fact, at the time of our death, serotonin in the brain triples.

After “Vanavond”, there is a stylistic change and the EP closes with two ambient songs: “Memory Hole” and “1983”. “Memory Hole” is a synthesizer extension that, although it lasts two minutes, feels like a sigh. In the muffled background sounds you can appreciate with difficulty, or even imagine, the sound of raindrops falling.

“1983” is an old track that received a rework in this last year. As in “Blizzards”, the artist decides to use a track aimed at feelings of dispersion and containment, to put an end to this beautiful dreamy delirium.

1. In an interview for Electronic Beats in 2014 you said that “the best music is the one that you hear for the first time and you think “that’s nice” but after listening to the whole album a few times more you think “no, this is amazing””. Do you think that the best music demands a period of adaptation from the audience? Some sort of intellectual effort?

I guess everyone hears music differently so it’s impossible to comment on how people will perceive it.. Some people get into stuff instantly and others it will grow on them. it’s 100% subjective, I think.

2. How long does it take you to finish a track?

Again, it varies! i think every musician will tell you that… Sometimes you can bang stuff out in a day and others you’ll be working on it for months, so yeah there’s your answer.

3. How much do you think the geographical context can influence the work of an artist? Would your music be the same if you were living in Los Angeles, for example?

I’ve never lived outside of the UK but i think I’d be making the same stuff basically wherever I lived. When I was living in London I don’t think my music sounded more “urban” or something, though the people you meet in a certain place might influence you, I don’t know. Hard to tell really.

4. Do you think that young artists may have more opportunities if they live in a big city like London or living in a smaller place can make you more productive?

I guess maybe if there’s more chance of making connections with people, but also a lot of that stuff happens online, it did for me and that was 20 years ago; but there’s definitely practical advantages of living in a bigger city, travelling is easier, more gigs happen there, etc.

6. Do you ever use samples?

Yes, I use a lot of little percussion samples here and there and I’ve made stuff with samples for fun, but I rarely use discernible samples in my music.

7. I´m not a religious person but I think all humans are built to be spiritual. In that sense, music for me it’s the closest I get to experimenting a religion, and dancing in a club is probably the closest I have felt to be part of a spiritual and social ritual. Do you have that in mind when you are composing? Do you feel musicians and artists have a responsibility towards society in that sense?

8. Once it becomes your job, does your relationship to music change?

Maybe yes… Maybe when you have deadlines to meet or heavy touring schedules it can be stressful but it’s all totally worth it, I wouldn’t change it for anything.

9. You published your first EP when you were only 20 – Outhouse (Border Community, 2003)- I think it’s a privilege that you signed so young to a label and also the success and opportunities that followed, especially after your first album Drowning in a Sea of Love (Border Community, 2006) However, when you are 20 you are still constructing your own identity. How did it impact you and your life?

Yes, I think because I started so young it’s been the only life I’ve ever known really. I was studying music at college at the time so having some kind of musical success at that stage was like, “right, my life is totally about music now”, so it became pretty much my entire identity at that time. As you say, you’re definitely still growing up at that age so yeah, it’s made music become my main thing, I guess, haha. It is quite a strange life to be thrown into at that age.

10.   You said that your parents were at first “a little edgy” about you wanting to pursue music as a career. Since they arenˈt artists and they probably feel that is very difficult to make a living out of it. Did that make you feel insecure about your own decisions? What would you suggest to a person who may be in that situation today?

Yes, there’s always a degree of insecurity about most thing, I guess… I’ve always been confident that music is the thing I want to do, though, but yeah, I guess I’d suggest to someone that they just have to follow what they truly want to do. If you believe you want to do that thing for the right reasons, then you should pursue it.

11. Do you improvise in live shows?

Oh yeah, my live show is mostly improvising, haha. I mean, I have a whole bunch of loops laid out beforehand but yeah, the live show is built on improvisation.

12.   You have said that cultural differences play a part on how audience responds to your music. As an example, you said: “In Tokyo, the entire front row was filled with girls who were crying. You never get that sort of a response in Europe…” How does this make you feel? Can you tell me the differences between the crowd in England versus Spain?

haha! Cringe. England vs Spain – I mean the obvious thing to say is that spanish crowds are more lively, but also english crowds can be mental, but in a different way. I feel Spain has more of a passionate vibe whereas England might be more aggressive or something haha.

13. Which artists have your interest these days?

To be honest, I’ve been pretty bad at checking out new artists this last year or more… I’ve been really into patten lately, he released 4 albums last year! and they’re all hyper-detailed and crazy. Also been really into Refreshers, a pseudonym of Lukid where he makes very authentic sounding old school jungle. Very enjoyable indeed.

14.   You said that, sometimes, you procrastinate watching Youtube videos. Can I see an example of what you watch?

Oh, all kinds of stuff! Mostly old gaming videos of 90s computer games and sometimes I watch videos by this guy who travels round Russia and former soviet countries. I find that stuff really fascinating. He’s british but speaks Russian, so it’s interesting seeing him interact with people.

15.   Through previous interviews I read that you used the word ˈpsychedelicˈ to describe the visuals you use in your shows and you related it to religious experiences. Do you believe psychedelic drugs can be inspirational?

I think I was likening it to the aesthetic of the music rather than literally being linked to psychedelic drugs, something which I have no experience in. I think my brain is quite weird already, the way some people talk about being on psychedelic drugs sounds like how my brain already works. Some people are just born with that kind of creative mind, I think.

16. While I relate certain electronic music to spirituality, I also feel that the last trends in music, such as trap, have a lot to do with the promotion of capitalism. Do you believe music can be political even when the artist didn’t intend it?

I guess, as i said before, you can’t really know how someone else is perceiving your or others’ music, and yeah some music is overtly political, some is utterly a-political, so if someone wants to associate any music with a political ideal than that’s going to totally down to them, I guess. Once it’s in the public domain the artist has little control really.

17.   I know that you picked Sanxenxo as the name of the EP because you like using names of places that you find interesting and also you like the sound of the name, but can you tell me how do you imagine Sanxenxo since you have never been there?

Well. I’ve been to Galicia, but not actually Sanxenxo, haha! beach, rocks, kinda windy? I like the climate and the landforms of the north coast of Spain, quite interesting.

18. Apparently, Burial made the song Archangel in 20 minutes, after his dog passed away. I link this to strong, visceral emotions pushing us to quickly produce something where to put our feelings. Have you ever had a similar experience with a track. And if so, which one and why?

These days everything I make seems to take forever, but i think “the sky was pink”, my original album version, that came together very quickly, like in an afternoon. There was no real drive behind it though. Other than I think I’d discovered this new synth sound which I used for the lead part on the track, and I was playing around with that and wanted to record it. Around that time I was into making drum loops that were mean to sound like a drum kit, etc. So the vibe for that track, and then my first album, was pretty much that.